I’m sitting by the ocean listening to the evening’s competing prayer calls ring out over the city, and I still can’t quite grapple with the fact that I’m in Casablanca.  In Morocco!  I’ve been dreaming about this day for years, and finally, I’m here.  I’ve spent my first day visiting the legendary city of Casablanca, and before I part ways with my entry point into Morocco for my next city (Rabat), I’m eager to share my thoughts.

Yesterday, after a grueling 12 hour travel day (thanks to terrible Prague-Casablanca flight connections), I arrived to the Casablanca airport ready to jump into bed.  First, I was shepherded through to immigration, where I was met with a sticker on the immigration window that said, “Smile, you’re in Casablanca!”  I’m certain that the immigration officer thought I was insane because, truly, this sticker put the biggest grin on my face.  After receiving my Moroccan passport stamp, I made my way towards baggage claim and what I thought would be a similar baggage claim experience to every other that I’ve ever had.  Nope.  Customs officials actually check all bags, even in the “Nothing to Declare” section, which was an exciting surprise.  Obviously my backpack didn’t look too threatening, and I was sent on my way.  I knew the approximate price of a taxi to get to my hotel, and considering it was nearing 9:30 pm, I was game for a quick and easy trek to the city.

The airport in Casablanca looks strangely void of all shops/restaurants/normal airport things… until you go outside.  All of the food shops are outside!  It was such a great idea, I would love to grab lunch outside of the airport before being crammed into that metal tube to go catapulting through the sky.  In any case, after looking over this outdoor food court, I found my way to the taxi stand.  I was placed (literally) in a taxi with a nice man named Rada.  Rada told me that the cost of the taxi ride would be 300 Dirham after seeing the address of my hotel, and I agreed, so we went on our way.  On the entrance ramp to the highway, Rada pulls over, asks to look at the address again, and then politely informs me that he misunderstood where the hotel was, and the cost would actually be 650 Dirham.  More than double the originally agreed-upon price!  He asked if it was okay, and I just laughed.  We were on the highway entrance ramp- this didn’t seem like a good time to say no so that I could find out what his next move would be.  After this initial impression, I was grumping pretty hard in the back seat, but eventually Rada and I began to talk (mostly in French, which was an interesting exercise for me).  Sometime during this chat, he asked me out for coffee, and I politely said something to the effect of, “Yeah, sure”, figuring this was some sort of hypothetical coffee.  Again, nope.  Next thing I know, we’ve stopped at a coffee shop on one of the busy streets of Casablanca, and we’re drinking espresso at 10:00 pm.  It was amazing.  I liked talking to Rada and learning about him and his country over a casual nighttime coffee.  Actually, it was sweet of him, because he picked up the bill and then continued driving me to my hotel.  These types of encounters are my favorite, and while I was a bit nervous at this somewhat unusual taxi situation, I was thankful for the opportunity to be invited into the life of a local stranger that I’d met by chance. So all in all, a successful first 2 hours in Casablanca.

This morning, I made my first stop the Hassan II Mosque, located on the coast of Casablanca.  I got there about an hour before the tour I planned to take so that I could find something to eat.  I ended up at a very local café with excellent coffee and pastries (for cheap!), and enjoyed sitting amongst the local café patrons sipping java while looking down the road at the 3rd largest mosque in the world.  What an incredible experience.  Afterwards, I made my way over to the mosque, and began taking an absurd amount of photos.  Really, I’m ashamed.  But the exterior of the mosque was just so beautiful, I really couldn’t stop myself. 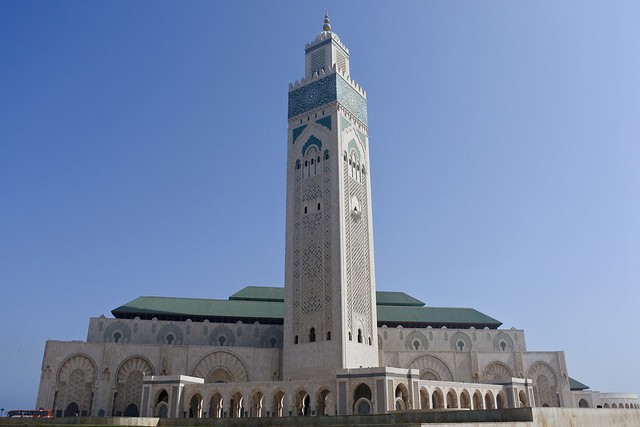 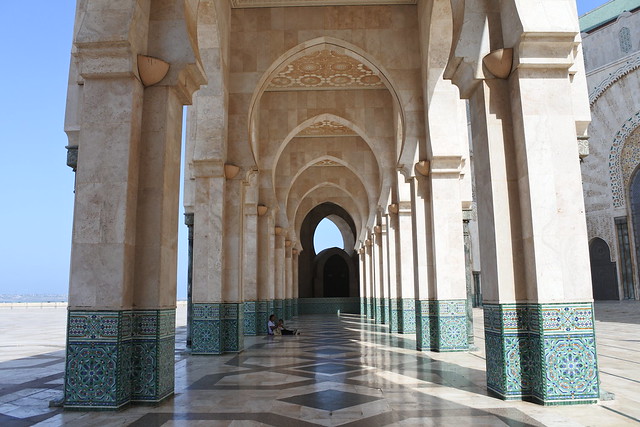 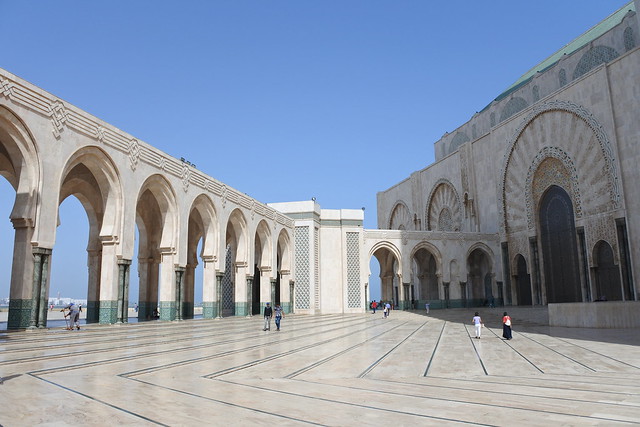 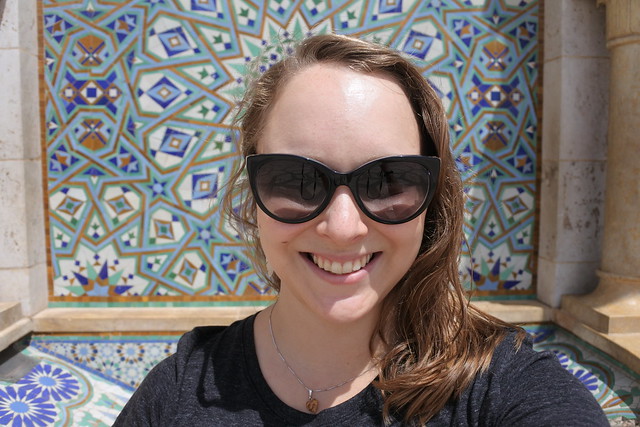 After about a half hour of that, I went to purchase tickets for the 11 am tour.  It’s difficult to find online, but the Hassan II Mosque allows visitors inside 3 times per day (excluding Friday) at 9, 10, and 11 am.  Tickets are 120 Dirham for adults, and 60 Dirham for students, which includes a guided 45-60 minute tour, and can be purchased on site at the cash desk.  It’s good to arrive about 15 minutes prior to the tour start time, as all visitors of all languages will be lining up to get their tickets.  Tours are offered in English, Spanish, French, German, Arabic, and Italian.  A lot of visitors will only visit the exterior of the mosque, which is admittedly gorgeous, but the interiors are absolutely worth visiting.

The mosque is the 3rd largest in the world after two in Saudi Arabia, and has the tallest minaret in the world.  The structure was built in 6 years because the craftsmen worked in shifts 24 hours/day 7 days per week.  It’s absolutely mind-boggling how incredible this place is. 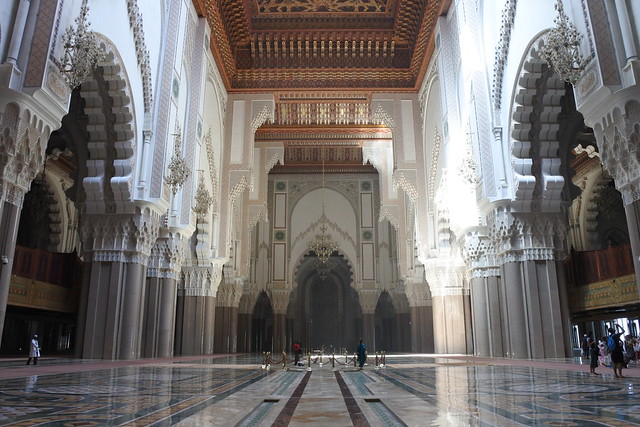 After visiting the mosque, I spent some time walking the coast and watching the mosque fade in the distance while local children swam in the ocean below.  It’s clear that despite this being such a grand structure, and such a highly-visited tourist attraction, it’s still a center of the community. 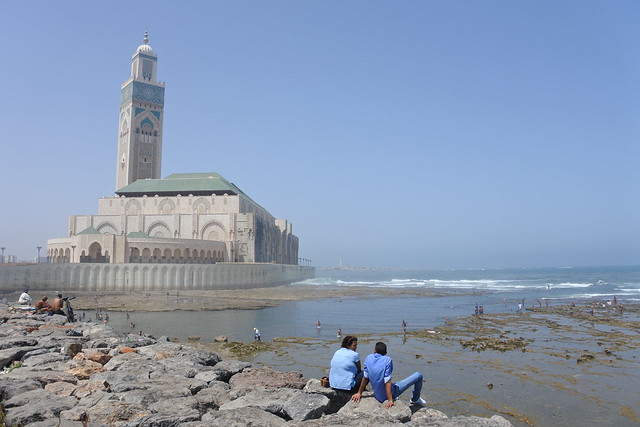 After getting exhausted wandering in the 90-degree humid heat, I hopped in a taxi bound for the Habous neighborhood of the city.  This section of Casablanca is referred to as the “new medina” or “little Marrakech” because of the market stalls lining the streets, but still the medina nature of the architecture and layout despite being outside the old city walls.  First, I grabbed lunch at a local café just outside the medina.  The waiter didn’t speak English, so I was back to communicating in French.  That would have been fine, except I’m so sure that French is slightly different here, and people also speak really quietly.  Even if I could understand him, I definitely couldn’t hear him, so I just agreed to what he was trying to suggest.  I ended up eating a traditional breakfast item of omelette tangine with miscellaneous meat, and it was really good!

After lunch, I began exploring the medina that rested just beyond my café.  I loved walking around this part of the city and checking out what all of the shop owners and vendors were selling.  I found it really interesting that the handful of stalls on the road leading from my taxi drop point and restaurant were incredibly touristy, with vendors trying to convince me to purchase their products. 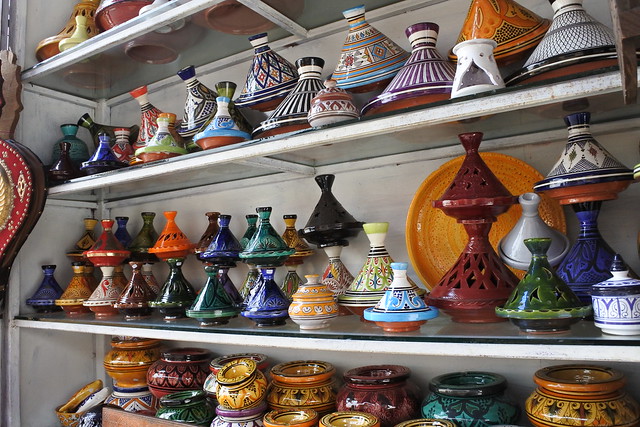 As I kept walking further into the market, the shops clearly became “local” with local women purchasing dresses made from exquisite fabric, and men haggling for new shoes.  These vendors didn’t seem interested in me, and it gave me the chance to just observe this local business- an amazing experience! 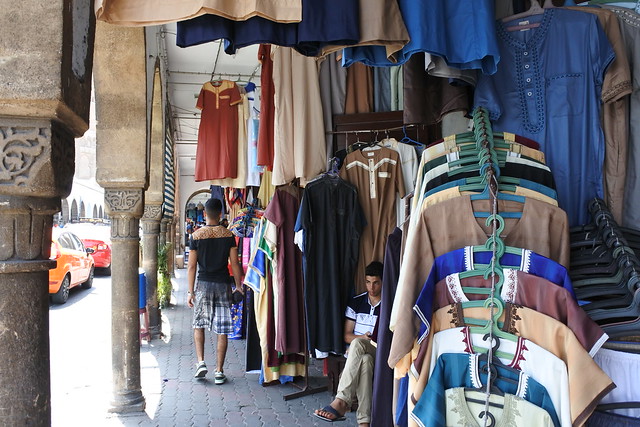 I also loved that so many of the vendors throughout the medina were selling art.  I didn’t see much of the traditional touristy mass-produced pieces, but rather beautiful oils on canvas of local street scenes, animals, and people.  Every nook and cranny of the market had something interesting- I’m very excited to compare this medina to others that I’ll see in upcoming cities. 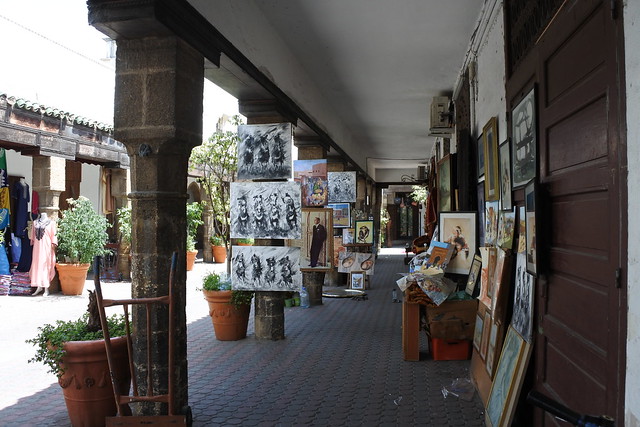 After finishing up in the medina, I was ready to head back to my hotel to relax a little and clean my clothes.  I went to grab a taxi, and found that 5 other people were trying to grab a taxi back to my hotel!  I ended up sharing one with two girls from Australia, who I came to realize would also be on the tour that I’ll be joining tomorrow.  I’m excited to meet the rest of the group and group leader at our starting point tomorrow evening- I’m sure that this is going to be an amazing adventure, and I can’t wait to get started.

Interesting in following along my Moroccan adventures?  Be sure to leave your e-mail address on the right side of the page to follow my blog.  You can also follow me on Facebook and Instagram to see regular posts and updates!